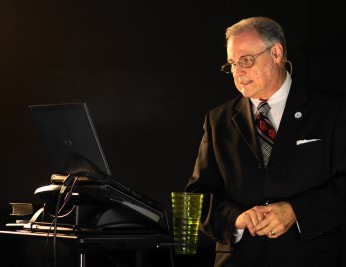 There are numerous teachings on the question: “Is America in Bible prophecy?” Focusing on  Isaiah 18, Wally takes a slightly different course as he introduces his audience to a verse-by-verse multimedia presentation that unfolds some of the mysteries of this chapter. He discloses how these seven verses do not address the nation of Ethiopia (as the vast majority of Bible translations maintain), but, rather, a nation “beyond” the coasts of that African nation, as stated in verse 1: “Woe to the land shadowing with wings, which is beyond the rivers of Ethiopia.” (KJV)

“Is America in Bible Prophecy?” with Wally Wood

Wally is a native of Houston, Texas. He’s been an ordained minister since 1980, with a special interest in end-time Bible prophecy. His first book, Cashless Society: A World Without Money, published in 1974 by the Southwest Radio Church in Oklahoma City (currently out of print), predicted a fully digitized economy by the 21st century — 10 years before the public debut of the Internet! In his book, the World Wide Web was called Cencom, for Central Computer. Shortly after the publishing of that book, Wally was hired as Research Director for that very popular, international prophecy ministry. He also served as editor of the ministry’s weekly radio broadcast and monthly publication, Bible in the News.

From 1981-1985, Wally served as News Director for the Houston radio outlet of the Jimmy Swaggart Evangelistic Association, KJOJ, during which time he founded and operated the original Christian News Network (CNET) and the Revelation File commentaries over the Sonlife Radio Network. George Otis, Sr. (VOICE OF HOPE Ministries) and Marlin Maddoux (Point of View radio host) were original Board members.

On June 6, 1982, the War in Lebanon began as the Israel Defense Forces (IDF) attacked and captured the Crusader fortress known as Beaufort Castle in southern Lebanon, effectively shutting down daily missile incursions of the Palestinian Liberation Organization (PLO) into northern Israel from that site. News of the war and its progress was the lead story of news outlets across America, including daily updates by Wally over The Revelation File. It wasn’t long before Israeli consulate officials in Houston began listening to Wally’s reports, noting that he was “the only news reporter in America that did not use the term ‘Israel’s invasion of Lebanon.’” Consequently, the Office of the Prime Minister of Israel (Menachem Begin) invited Wally to be their special guest to Israel in late-August 1982, from where he made daily live broadcasts by phone back to the radio station in Houston over a two-week period.

Today, the “new” Christian News Network is a strong, vibrant online news organization under separate leadership, but it is a remarkable fulfillment of everything Wally envisioned it to be back in the early ’80s — a professional news organization comprised of news journalists who report and analyze world news from a biblical, even prophetic, perspective. Visit ChristianNews.net.

In 1999, Wally was placed on his first national speaking tour with the Prophecy Club. His topic was The Embedded Internet: The Final Evolution, from which came his second book by the same name, published in 2000 (Amazon.com). He spoke of a day when “the Internet will be attached to everything you touch, and everything that touches you – a world of total transparency!”